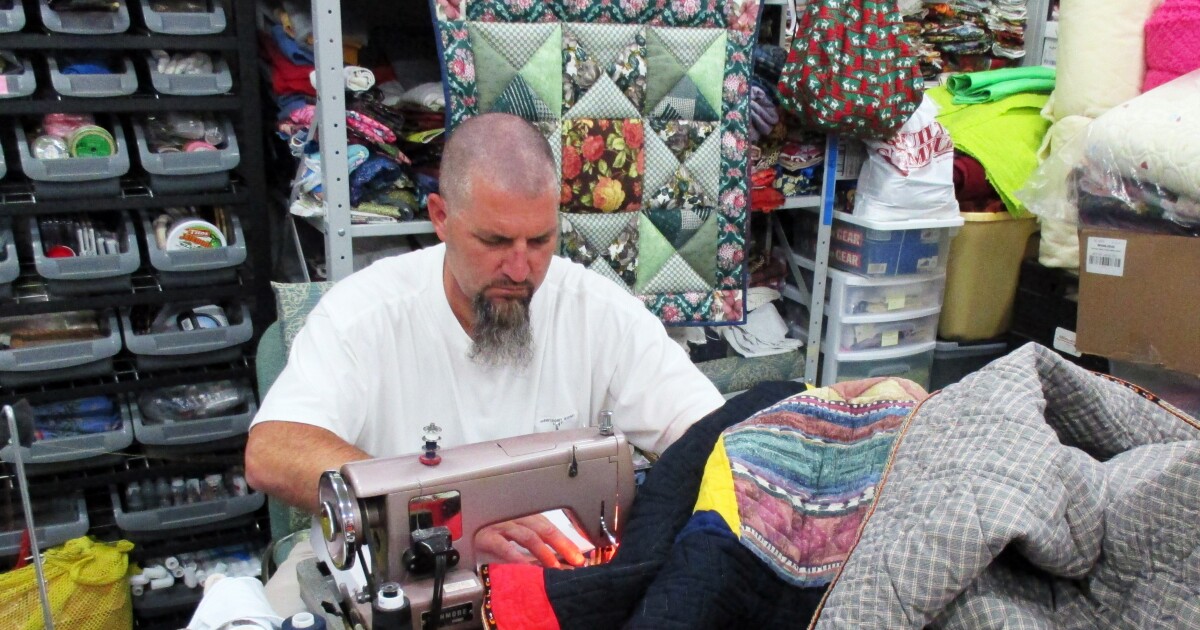 Every now and then, Jim Williams wakes up in the middle of the night and lies awake in his prison cell thinking about quilt designs.

While his fellow inmates at the South Central Correctional Center snore and move in their sleep, Williams ponders the arrangement of the fabric shapes and rearranges them in his head. “I’m kind of a perfectionist,” he said. “I wake up at 2:30 in the morning and think, ‘This color is really not going to work.'”

It was not always like this. Williams had never touched a sewing machine until last year when he was recruited to sew face masks for prison inmates and staff during the pandemic.

Now he’s part of a small group of volunteers in Licking, Missouri Jail who spend their days making elaborately designed quilts for charity. The group, which is entirely dependent on donations, is working on an ambitious project: sewing custom quilts for each foster child in Texas County.

The seven men in the program meet daily in the prison’s sewing room, and the hum of the machines ensures a constant soundtrack.

One of the more experienced quilters in the group, Richard Sanders, never intended to participate in the program – in fact, he actively avoided groups like this in the past. But shortly after visiting the sewing room to fix a broken machine, he decided to enroll.

“It’s just a really peaceful environment,” said Sanders, who has been incarcerated in Missouri for more than three decades. “The more busy you are, the better you feel in these places.”

He’s made hundreds of quilts and sent photos of each to his old mother over the past eight years. Despite the many quilts he has donated to charity, Sanders said, “I really feel that in my heart we should do more.”

The quilting program offers men a temporary “escape from the prison world” and an opportunity to engage with the community, said Joe Satterfield, case manager at South Central. In order to join the group, an inmate must not have any recent behavior violations on his or her file.

“You can see a change in their attitudes,” said Satterfield, who runs the program. “A light goes on like, ‘Oh, this is a new way. I can actually be a part of something. ‘”

The project is based on the concept of restorative justice, which emphasizes community building and rehabilitation versus punitive action. As part of this effort, Missouri inmates volunteer in prisons across the state in a variety of ways, including training shelter dogs and growing vegetables for food banks.

Richard Sanders sews the edge of a quilt that will later be donated to charity. “It’s just a really peaceful environment,” said Sanders of the sewing room at the South Central Correctional Center.

In the South Central sewing room, members of the close-knit group work towards a common goal: to create more than 80 unique quilts for children in the Texas County’s care system.

The men design the quilts individually for children and embroider their first names on the corner. For volunteer Rod Harney, it is an attempt to let these children know that they have not been forgotten.

“You see the names of these children in foster homes; You see a 1 year old or 2 year old and it breaks your heart, ”said Harney, who was a sewing student in seventh grade. “But that lets us know that we are still human. You can’t express enough what it feels like to do it. “

Harney recently put the finishing touches to a duvet for an 18-year-old boy who is about to leave the care system.

The quilt is trimmed in crushed velor and features a grizzly bear who appears to be staring through a window – to show the teenager that “the world is on your doorstep,” Harney said. He spent more than 100 hours carefully embroidering geometric patterns on each square.

When completed, each quilt will be wrapped with a handmade hat along with school supplies and toiletries donated by other South Central inmates.

Jim Williams is now designing an orange and meerschaum green quilt for a 4 year old boy. He feels a deep sense of fulfillment with everyone who is sent away.

“They don’t get much for a foster child; They are in a home that makes them feel like part of the family or not, ”said Williams. “So when I see this quilt on the table, I get emotional. I really do. “

For more information about the quilting program at the South Central Correctional Center or to donate materials, contact Joe Satterfield at [email protected]